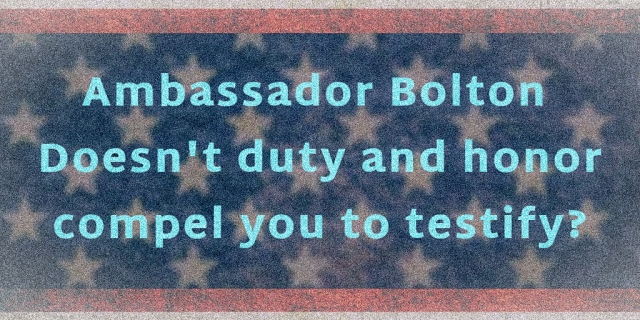 In a letter to the House of Representatives, your attorney informs The People’s House that you were:

“personally involved in many of the events, meetings, and conversations about which you have already received testimony, as well as many relevant meetings and conversations that have not yet been discussed in the testimonies thus far,”

As a fellow Citizen of the United States, I urge you to testify if you have knowledge that our President attempted to commit a crime, or otherwise abuse the power The People granted him, in such a way that our Nation’s security was at risk, or would have been had his attempts been successful.

“If the House chooses not to pursue through subpoena the testimony of Dr. Kupperman and Ambassador Bolton, let the record be clear: that is the House’s decision.”

Let me shine a light through a magnifying lens to illuminate the point so thoroughly a star-nosed mole could see it in a tunnel two feet underground. As a Citizen of the United States, your highest duty is to your fellow countrymen. Not to the President. Not the to Office of the Presidency. Not to a Party.

Your highest duty is to your fellow countrymen. We are the Nation.

Please take a moment to reflect on the words in the Preamble to our Constitution:

“We the People of the United States, in Order to form a more perfect Union, establish Justice, insure domestic Tranquility, provide for the common defence . . . “

After reflection, I hope you will come to see that neither subpoena, nor Judge’s order, nor even this letter should be required for you to testify.

If you have testimony your fellow countrymen need to hear to establish justice and to ensure the common defense of our Nation, then doesn’t your duty and honor compel you to testify before the Nation?

Let us hear your testimony, sworn under solemn oath, with all due haste.

Lisanne Lombardo
Citizen of the United States of America